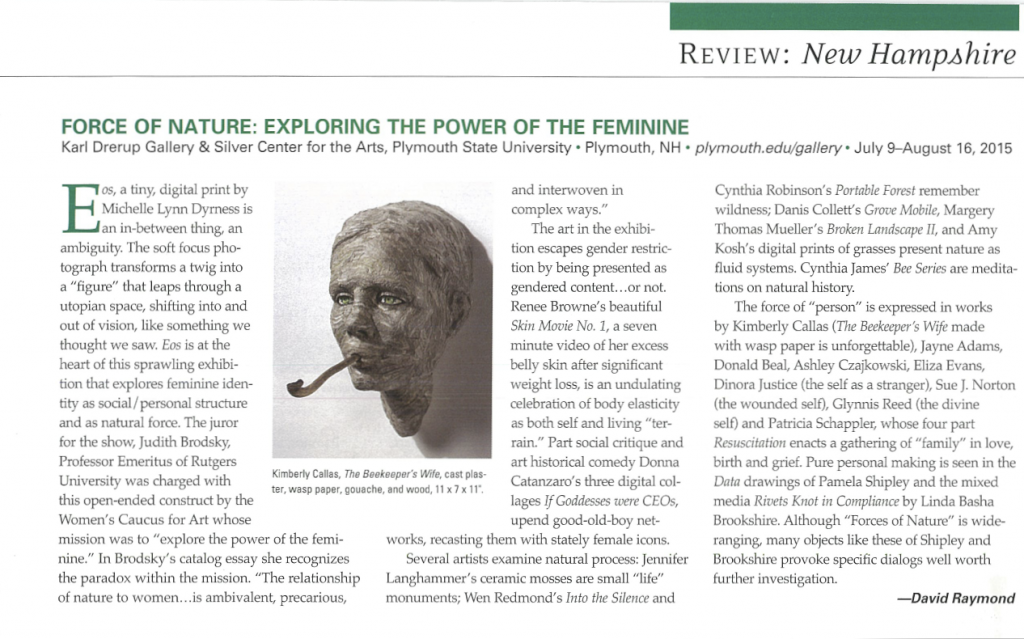 Review: Force of Nature: Exploring the Power of the Feminine

Eos, a tiny, digital print by Michelle Lynn Dyrness is an in-between thing, an ambiguity. The soft focus photograph transforms a twig into a “figure” that leaps through a utopian space, shifting into and out of vision, like something we thought we saw. Eos is at the heart of this sprawling exhibition that explores feminine identity as social/personal structure and as natural force. The juror for the show, Judith Brodsky, Professor Emeritus of Rutgers University was charged with this open-ended construct by the Women’s Caucus for Art whose mission was to “explore the power of the feminine.” In Brodsky’s catalog essay she recognizes the paradox within the mission. “The relationship of nature to women…is ambivalent, precarious, and interwoven in complex ways.”

The art in the exhibition escapes gender restriction by being presented as gendered content…or not. Renee Browne’s beautiful Skin Movie No. 1, a seven minute video of her excess belly skin after significant weight loss, is an undulating celebration of body elasticity as both self and living “terrain.” Part social critique and art historical comedy Donna Catanzaro’s three digital collages If Goddesses were CEOs, upend good-old-boy networks, recasting them with stately female icons.

The force of “person” is expressed in works by Kimberly Callas (The Beekeeper’s Wife made with wasp paper is unforgettable), Jayne Adams, Donald Beal, Ashley Czajkowski, Eliza Evans, Dinora Justice (the self as a stranger), Sue J. Norton (the wounded self), Glynnis Reed (the divine self) and Patricia Schappler, whose four part Resuscitation enacts a gathering of “family” in love, birth and grief. Pure personal making is seen in the Data drawings of Pamela Shipley and the mixed media Rivets Knot in Compliance by Linda Basha Brookshire. Although “Forces of Nature” is wide- ranging, many objects like these of Shipley and Brookshire provoke specific dialogs well worth further investigation.