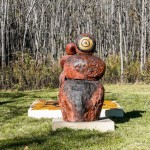 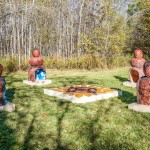 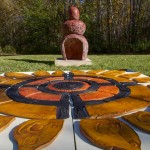 Kimberly Callas, Cave with the Field, from Four Gates with Guards, Multi-Media, Photo by Seeger Solutions 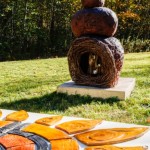 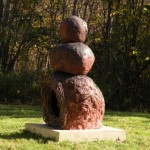 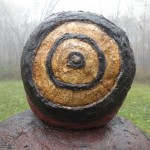 Kimberly Callas, Basket, Back View DETAIL, in the Fog, from Four Gates with Guards, Multi-Media 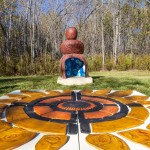 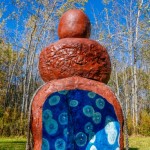 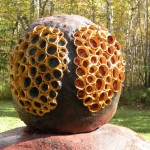 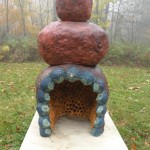 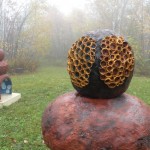 Kimberly Callas, The Bee Maiden, Back View DETAIL, with Sisters, from Four Gates with Guards, Multi-Media 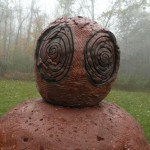 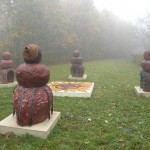 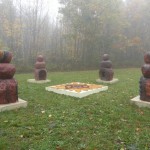 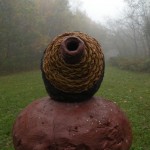 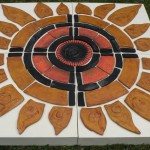 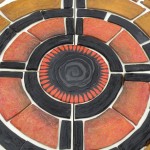 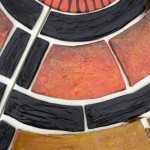 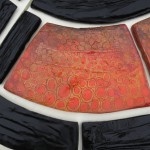 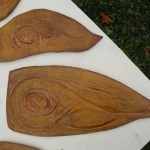 Four Gates with Guards represents my journey to the ecological self through nature-based symbols, as I met each guard and went through each gate. Though not a portrait in itself, the installation was key to my understanding and visualization of the Ecological Self. Four Gates with Guards became my own meditation on how natural processes such as cell propagation, bees building honeycomb, changes in weather, seasons, time, birth, death and decay, become the symbolic language of life. I was beginning to see how we create meaning from nature as a way to bring us back into relationship with nature.

I’ll briefly go through the installation, here seen installed in a small forest field in Midcoast Maine. The figures are based on cairns or stacks of rocks, common in the Maine landscape, each with its own cave. The figures represent the stages of a spiritual quest using symbols that come from nature.

The first figure is called Cave, based on the initial stage of facing one’s fears, often called ‘cave time’.

The second figure is called Basket. Basket is at first a threshing basket that is used to separate the wheat from the chaff, then it becomes a planting basket, containing the new seeds or eggs for the next generation, and finally the harvest basket.

The third Gate and Guard is The Bee Maiden. She is filled with the precious honeycomb that represents spiritual food that is either stolen or given as a gift from the gods. These three figures are given a false face on the back view, like butterfly wings have false eyes, so that if you approach from the back, you think you are looking at the front.

The fourth Gate/Guard is Sisters and stands for the unification of the Microcosm and the Macrocosm. The Cosmos is now contained ‘within’. Sisters is named for the Pleiades, the place in the heavens where the ‘spirit’ exits and enters. This cosmic spot is also represented on a human scale as the top of the skull or the smoke hole in a tent. Here instead of the false eyes, there is a chimney.

The central floor piece of Four Gates with Guards, is a 6’x 6’ painted tile piece called The Field. This piece represents the ‘map of the mountain’. It is a two-dimensional view of a mountain from above combined with a Calendula flower. The Mountain is used here as the chosen destination of the spiritual seeker, as the perfect meeting point between heaven and earth. The central black circle with the orange petals implies the fire and the pit of the volcanic core. The volcano making the mountain not just the highest point, but also the access point to the deepest center of the earth. The direction implied ‘by the map’ is to reach into the heavens as well as the Earth to align oneself to receive wisdom. And if this is to be missed, there is a large central target drawn in black. An obvious “X” marks the spot where one would find the treasure.

The outer detail in this artwork resembles the petals of the Calendula flower. This is a healing flower and called “the Bride of the Sun” by certain monks because its head follows the sun throughout the day, like a sunflower; a secret indication to “follow the sun” to reach the mountain.

“I think it’s only in our heads that we are alienated; our bodies are still carrying on a conversation with the planet, but our heads are denying it.” Gary Lawless

As I was working on this installation, I was also collaborating with nature poet Gary Lawless. He wrote poems that corresponded with the work and he created two chapbooks; one titled Basket and the other Field both with the subtitle: Notes Towards a Field Guide. His poetry and thinking greatly influenced this work.